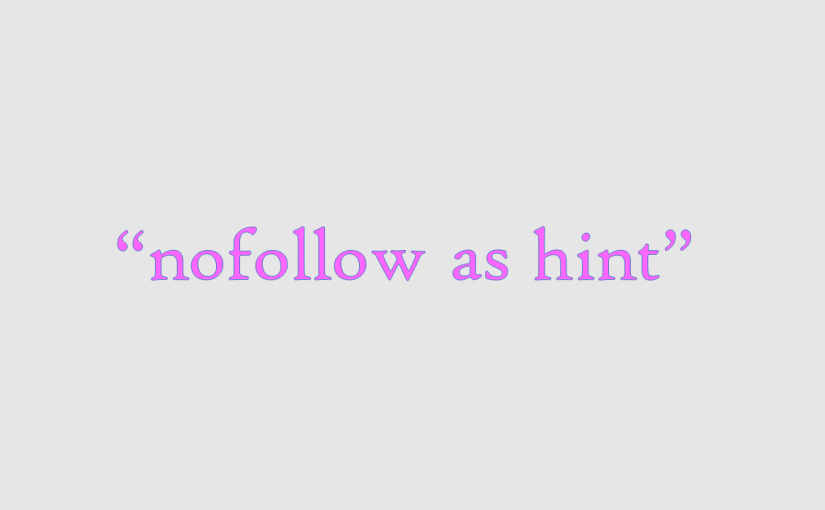 In this post I want to share my initial response to the “nofollow as hint” announcement Google made, adapted from the presentation I was due to give at BrightonSEO in April 2020.

I understand this is coming about 9 months late, but I’m also pleased to see that I’ve not seen this (somewhat pessimistic) argument being made yet. The release was stylish, which I appreciate:

Sometimes You Have to Link to Competitors

I’d like you to put yourself in a scenario. Sometimes, for a page to be good, you have to link to query competitors (external URLs which rank/attempt to rank for the same query).

Previously, “nofollow” might have been used to get around this. But if “nofollow” is a hint, this external link is now either “nothing” or “one of the best links possible” to give that competitor. You can’t be certain which it is.

Thinking about how the new attributes work, the “strongest” restriction seems to be “sponsored”:

And if you want to be sure you aren’t giving this competitor the best link they can possibly get, you’d better be marking that content as sponsored.

I can’t see a downside from misusing this attribute “just to be sure”, and this is going to be appealing for SEOs, as it was with disavow.

I’m sure there are arguments for linking to quality resources being good for SEO, and that this approach undermines that by asking Google to discount them as sponsored listings. I’ve not seen the argument for linking to resources that rank for the same queries. Under this method you’re still linking to them, but you don’t have to rank beneath them.

Why Are You Talking About This?

Now consider the publications (for example: shit rags) that motivated this change from Google – high authority, editorially driven websites which blanket nofollow all external links. Their motivations for doing so are approximately:

Google have solved the problem as things are now – in effect giving themselves permission to use the information more for crawling, indexing and ranking purposes as they see fit. But…the motivations of these publications have not changed.

Google is going to learn from these overcautious publications. And what it may learn is that some genuinely editorial links look exactly like other editorially awarded links which have been marked “sponsored”.

So my pessimistic take is that some editorially awarded links on different publications, which have not been marked as sponsored, will be flagged as sponsored and devalued. Google has kicked part of the original problem a year or two down the road.

You are probably thinking “no way, the algorithm is too smart to make this sort of mistake. It’ll ignore these blanket sponsored links.”

Perhaps. Although Google sometimes corrects (overrides) user signals (e.g. misconfigured canonicals), they are typically happy to honour the stricter ones. For example, if you disavow your own link profile, or block your own website in robots.txt, or accidentally set “noindex” for all the HTTP headers on your website thanks to a misconfiguration, what happens?

I think the optional attribute which declares “money changes hands with this link, please exclude it” is going to lean toward “always obeyed”.

Whilst I don’t think this is a huge problem, I do enjoy the idea of Google accidentally discounting what should be one of the most trusted link formats on the internet.

This argument (?) has a real resemblance to an older post of mine from 2012 (when I was very new to all of this).

This of course confirms once and for all that I am a hack SEO blogger forever regurgitating the same content. Anyway, thanks for reading!

Here are the slides I went with: